skip to main | skip to sidebar

Today was a great day in Upstate SC.  Not only did we have some fantastic weather but one of the great new(ish) races happened today.  The brainchild of Coach Matt Hammersmith, the Altamont races are up and over our very own Paris Mountain.

I say races because it is four in one (five if you count the ruck division which is part of the half marathon).  Except for the 5k, all of the races go up and over Paris Mountain via Altamont road.  This year, the full marathon crosses the summit 4 times, the half marathon (and ruck division) crosses twice and the Mountain goat relay traverses the same 4 summits as the marathon.

The relay is intended to be a 4 person relay, but as we got signed up, one of our members realized he had a conflict and had to pull out.  We didn't have a fourth at that point, so I chatted with my remaining team-mate and we decided to do the relay as a 2 person team.  That gave each of us the opportunity to run the half marathon course on our way to the finish.

The participant list seems to have been taken down, and the results are not yet up, but if I recall, there were about 6 relay teams out there.  Marty gave me the pleasure of going first, so I got to start with the masses.  There were about 50 half marathon runners that the relay teams started with so it was a pretty good group.

Of course the race immediately goes uphill, for just a little under 3 miles we climb to the first summit of Paris Mt on Altamont road.   Not surprisingly, some strong runners immediately went off the front.  I was close enough to see them make the turn onto Altamont road, but that was the last I saw of them until I crossed their path after their turn-around.

Last year I ran this relay as part of a 4 person team but I did so as a long run - even though only one leg (6.6 ish miles) counted in our relay effort, I went ahead and ran back to my car to make it a half distance.  I did that last year in something close to 2 hours (possibly just over 2 hours I don't recall).  I was in better run condition last year so this year my target was to race this event and finish the half marathon distance in under 2 hours (targeting an average 9 minute / mile pace or better).

As I set out on the lower slopes, per my last blog, I had a specific heart rate target for the uphills.  That target was 155bpm.  Maybe it was the focus that being in a race brings, but I had no trouble hitting and maintaining this HR during today's climbs.  It seemed like every time I looked down at my garmin, the HR was 154.  Yes, there were a few times I saw 157 (and once I did see 159 on a very steep section), but overall, I felt very consistent.

Looking at my garmin data, it does appear that I had peak HR above my target, but my averages are spot on for the uphill sections.  Overall I felt strong on the hills, training around the house and having Altamont road as my 'backyard' doesn't hurt!

As far as the downhills went, I didn't have a specific HR in mind, of course I wanted to try to keep it high which would indicate my effort was strong, but I was more interested in running as fast as I could with good form and without out-running my feet.  Clearly my avg HR was much lower on the downhills, but frequently it was still above 145 which pleased me.

As I crested the top for the first time, I was neck and neck with a guy I know.  For some reason, I felt I had to out run him.  As we headed down the mountain for the first time, I opened my stride and let myself run free.  It didn't take long before I had opened a small gap.  I didn't dwell on it though - I needed to just run my race.  Lots of things can happen in a race, and of course I could have bonked.  Or worse, I could have out-run my feet and face planted.  I ran well so I'm thankful for that.

I had my first gu on the way down the first slopes coming off the summit.  Followed that with some water and I was feeling pretty good.  Perhaps a mile or a so from the turn-around, there is a very steep section of Altamont road.  On the way out we ran down it and of course up it on the way back.  I had started to feel a little niggle in my right hamstring, so down this steep section, I shortened up my stride and changed from forefoot to heel strike.  This took some pressure off my hamstring and I just kept that shortened stride the remainder of the way down the mountain.  I did change back to forefoot strike after the steep section, but it seemed like whatever was going on had reduced significantly.

At the turn, I had been trying to count the relay teams in front of me.  I was thinking that I was running in third place.

After the turn around, I saw the guy I'm trying to beat and I had opened a pretty good gap.  Again, nothing's guaranteed, so I reminded myself to just run my own race.  Back to the target 155 HR and steady Eddie.

My HR did peak on that steep section where I had to change-up my stride, but the hamstring issues were pretty much gone.  I did take some base salt on the way up and that seemed to help.  Somewhere in there I had taken a second gu.  I don't recall exactly when, but my stomach started complaining to me and I realized I needed to hold back a bit.  That is when I took in the base salt.

Altamont road from the CVS side is a series of 4 (I think - I can never remember!).  You get a little break here and there on the way up that side.  I tried to take advantage of all of the flats and downhills as much as possible.  At the summit my average pace was 9m20s per mile.  Not quite good enough to break 2 hours, but I knew what was coming for the last 3(ish) miles.

Once I crossed the summit, I tried to let it loose and of course this is where my fastest miles occurred.  I watched as my average pace dropped to 9m10s / mile, then close to 9m per mile.  I came to the end of Altamont road, made the right turn and continued to push.  Not far from that turn, I see Matt Hammersmith himself coming up the hill.  Clearly he's running as a member of a relay team - to my knowledge, we were in third at that time.  He looked at me and said "you're killing it!".  Pretty good praise from a very strong athlete.  I found out later that he was running the third leg for what turned out to be the 2nd place team.

Finally, as I made the final turn to finish up my lap and hand off to Marty, my pace was under 9m / mile.  The half marathon finishes with a lap of the park, and for the relay we actually get to cross the finish line before we hand off.  I tagged off at 1h57m45s which my garmin showed as 8m55s per mile average pace.  I'm not sure I could have run that much faster!

After I finished, I was chatting with a friend who was on Matt's team - he was the first runner on that team.  They had been passed in the 2nd leg and he confirmed that I had brought us in in third place - that pleased me, especially considering the caliber of the runners in front of us.

My team mate Marty is a very strong runner who is in the midst of prep for his first 100 miler.  He's been knocking out the miles so he has some awesome endurance.  It doesn't hurt that he's also a strong runner who can knock out some fast miles.  We waited and watched as the first and 2nd place teams came in for the finish.  I missed the 1st place team come in, but the 2nd place team finished in 3h25m (roughly).  Marty had a strong run with a half marathon time of 1h52m.  That did put us in third for the relay teams with a total of 3h50m. 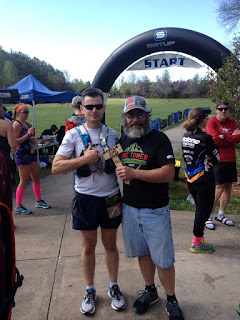 I wanted to upload a summary of my race, but I'm having trouble with getting my data uploaded - I'll try to update if I get that problem resolved.

So, key elements from today - focus on HR and moderate effort to allow for a strong finish.  Maintain good form both uphill and downhill.  Listen to your body and take nutrition and hydrate per plan.  Be flexible in your nutrition and be ready to adjust.  Most importantly - HAVE FUN!!
Posted by JD at 8:03 PM

Don't be shy! I'm interested to hear your comments or experiences.
NOTE: I have switched on the comment moderation because I have been getting a number of spam comments lately. Be patient, I'll post it up as soon as I can! Thx JD